“Although the specific capabilities of GBSD are highly classified, the need to field a system with 2020s technology instead of 1970s technology is apparent. When you consider ICBMs are the least expensive to acquire and most cost effective to maintain and operate of the nation’s nuclear weapon systems, fielding a highly reliable and cost effective system is a smart move.”

“A replacement is also needed for the Minuteman ICBM system, which first entered service in 1962 and has been upgraded and extended 40 years beyond its original service life. In 2010, after affirming the importance of maintaining a land-based leg, the Obama administration initiated the Ground Based Strategic Deterrent program, a modern ICBM system that will improve reliability, lower operational costs, and respond to current and future threats.”

“GBSD is the most cost-effective option for maintaining a safe, secure and effective ground-based leg of the nuclear triad,” Bartolomei said.  “It will address capability gaps to meet warfighter requirements, maintaining the preeminence of America’s ground-based nuclear strategic deterrent.

“A safe, secure, reliable and effective nuclear triad is essential to deterring threats against the U.S. homeland and underpins every other military operation around the world.”

“I believe nuclear deterrence is the bedrock on which all the rest of our defense efforts remain. Nuclear modernization is like the foundation of your house. When there starts to be crumbling in the foundation there are all sorts of implications… Through our neglect, every system has reached the end of their life and therefore we do not have choices, we have to pursue each… In each of these areas [the B-21 raider, GBSD, and nuclear command and control] we are out of flexibility.”

“The Air Force should make sure we keep GBSD on schedule, if not faster, if responsibly possible.”

“I firmly support the Secretary’s and Chairman’s public statements identifying nuclear deterrence as the highest priority mission of the Department of Defense. Our nuclear deterrent underwrites every U.S. military operation around the world and is the foundation and backstop of our national defense. I cannot overemphasize the need to modernize our nuclear forces and recapitalize the supporting infrastructure to ensure we can maintain this deterrent in the future.”

“The Minuteman III is aging, and modernization programs such as this are essential in ensuring that our Nation has a reliable nuclear deterrent through the rest of its lifespan and beyond. Most importantly, this visible indicator of our National security capabilities serves to assure our partners and dissuade potential aggressors.”

“We’re really excited about where we’re going in regards to GBSD.  I think the program is doing extremely well…”  “I think we’re seeing that the timelines for emplacement haven’t changed.”

“If you didn’t have those 400 ICBMs that are ready to go at a moment’s notice, you could actually cripple our nuclear enterprise with about 10 targets…”

“We’ve been able to sustain it and we’re going to be able to sustain it until we bring GBSD” online, but the margin is very slim, Clark added. “That acquisition is going very well right now … but we have a long way to go and we have to stay consistent. We have to continue to be committed to this.”

“Modernizing the ground-based leg of the triad is necessary for 21st century nuclear deterrence.  Any delay in the GBSD program will risk undermining the future deterrent capability the United States needs to defend its homeland and its allies.”
—Senate ICBM Coalition
Sept. 26, 2019
Source: Link

“In my view, delaying or deferring ICBM modernization threatens the enduring value of the triad and risks compromising the foundation of U.S. strategic deterrence and allied assurance.  Land-based ICBMs remain as critical today for these objectives as they were during the Cold War, and the need to retain and recapitalize them without delay is based on the sound strategic contributions they make.”

“Anyone who doubts the United States must modernize its nuclear deterrent need only look at the modernization efforts of the world’s other nuclear powers. Russia revealed a series of new strategic nuclear delivery systems last year, suggesting that nuclear weapons remain a key element of its national security strategy. China is expanding its nuclear posture, raising doubts about its minimal deterrence doctrine. North Korea has dozens of bombs and potentially can deliver them on Intercontinental Ballistic Missiles (ICBMs). To reaffirm the U.S. nuclear deterrent and extended deterrence commitments to our allies in this complex threat environment, we must prioritize the effective and efficient modernization of our nuclear triad”

“I think there’s tremendous support on the Senate side for the triad,” said Sen. Deb Fischer, the chairwoman of the subcommittee in charge of nuclear weapons, referring to the three methods of delivering a nuclear weapon. “I think everybody’s well aware of the importance that we make sure all three legs are strong.”

“GBSD addresses the problems of MM III aging, attrition, and declining capability. The GBSD program is a comprehensive effort to replace the missile system, weapon system command and control, and ground systems—as well as convert, modernize, or replace aging MM III infrastructure. Beginning with its initial deployment in 2028, GBSD will provide improved capability versus the legacy MM III, and ensure the ICBM force remains safe, secure, effective, and reliable out to 2075.”

—Ellen Lord, Under Secretary of Defense for Acquisition and Sustainment, U.S. Department of Defense
May 1, 2019
Source: Link

“The nuclear triad is the most important element of our national defense, and we have to make sure that we're always ready to respond to any threat.”

“In this environment, it is not possible to delay modernization of our nuclear forces if we are to preserve a credible nuclear deterrent.”

“To deter, you have to have a capability that provides the adversary a calculus that he looks at and decides that his options will fail. If the adversary has capabilities to operate from the sea, from the land [and] from the air, we have to be able to turn all those elements. That's how the triad was developed and that's how we need to go.”

“The globe is not getting any safer, and I believe the nuclear enterprise supports all military operations and all courses of diplomacy on the planet. When I describe what the Air Force does for the nation, I start with a safe and reliable nuclear deterrent and work my way out from there.” 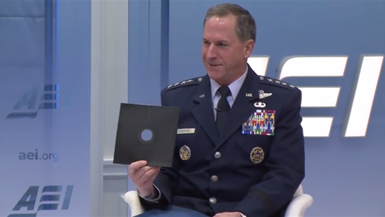 “This is a critical moment for our ICBM force. Nuclear threats are increasing around the world, and our existing ICBMs will not last forever. The (ICBM) Coalition is making a strong case to support the modernization of the ICBM force today so that it can continue to protect us for decades to come.”

“The fact is, most of our nuclear weapon delivery systems have already been extended decades beyond their original expected service lives. So it's not a choice between replacing these platforms or keeping, it's really a choice between replacing them or losing them. That would mean losing confidence in our ability to deter, which we can't afford in today's volatile security environment.”

“Making major changes to the nuclear modernization program and the nuclear policy framework on which it is founded would not only endanger U.S. national security, it would send a terrible signal to both our allies and our adversaries.”

“As we contend with the department's five strategic challenges, we recognize that successful execution of our defense strategy requires that we maintain credible nuclear and conventional capabilities. Our strategic nuclear deterrent remains effective, but it's aging and it requires modernization. Therefore, we're prioritizing investments needed for a safe, secure and effective nuclear deterrent.”

“I just want to be clear. I don't have a part of the triad in a sense, but I can tell you that in my view, my professional military view, and I am a member of the Joint Chiefs of Staff — the nuclear triad has kept the peace since nuclear weapons were introduced and has sustained the test of time. That is not unimportant. And that system has deteriorated, Congressman. And it needs to be revamped. It is not even an Army system. It needs to be overhauled and brought back up to its level of readiness.”

“While we seek a world without nuclear weapons, we face the hard reality that Russia and China are rapidly modernizing their already-capable nuclear arsenals, and North Korea continues to develop nuclear weapons and the means to deliver them against the continental United States. A strong nuclear deterrent force will remain critical to our national security for the foreseeable future. This is the highest priority for the Department of Defense.”