Steven Kuo, Northrop Grumman electrical engineer, was driving in Gardena, California, when he passed a doughnut shop with a gigantic model of one of the tasty pastries perched atop the building. “I was thinking, ‘Maybe I can use that to perfect the polarizer design,'” said Kuo, who joined Northrop Grumman in April 1997 and was motivated to solve intractable engineering problems.

When Kuo modeled the design on a computer, it worked well. Now he just needed a manufacturing team to build the pinch polarizer. The manufacturing engineers that Kuo met with were puzzled by the concept initially, but their eyes began to widen as he explained how it worked, he recalls. “Once I saw them smile, it really made me feel great,” Kuo said.

Under the direction of supervisor Andy Roberts, Kuo, along with manufacturing engineer Jim Ingram and other teammates, came up with a cost-effective way to mass-produce the polarizer.

“Steven showed me a design that I had never seen before, but the collaboration between the electrical and manufacturing teams was key to making this thing producible,” said Ingram, who has 30 years of experience under his belt. “It’s a great story of collaboration.”

The design resulted in millions of dollars in savings. “This is an example of a quality product that delivers high performance, yet it’s affordable to the customer,” Kuo said.

Team members “were under the gun” to develop a design that worked, Kuo said, and they spent days, nights and weekends perfecting it. “We had one month to come up with the design, but we were confident,” he added. “We worked around the clock.”

And the engineers faced the added challenge of devising a way to produce thousands of the devices while retaining high quality. “The design was great, but there was room for improvement,” Ingram said.

Ingram asked Kuo to make some tweaks, and the electrical engineer gladly obliged. “Steven made himself available to the manufacturing team so this could be done the right way,” he said. “We’re still getting the same performance for an unbelievably low cost.”

To date, the pinch polarizer has been so successful that it may be replicated across the company to solve engineering problems. “Our very best electrical engineers, like Steven, get out into the manufacturing areas to discuss product feasibility before something is made,” Ingram said. “I was beating my head against the wall trying to come up with a solution — it just took a little collaboration.”

Read more from our employees about Life at Northrop Grumman. 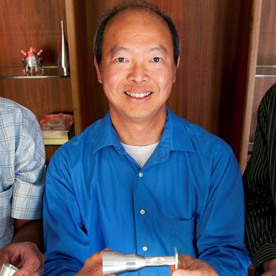 An unexpected source of inspiration helped manufacturing and electrical engineers to refine a satellite part, resulting in millions of dollars of savings over time.