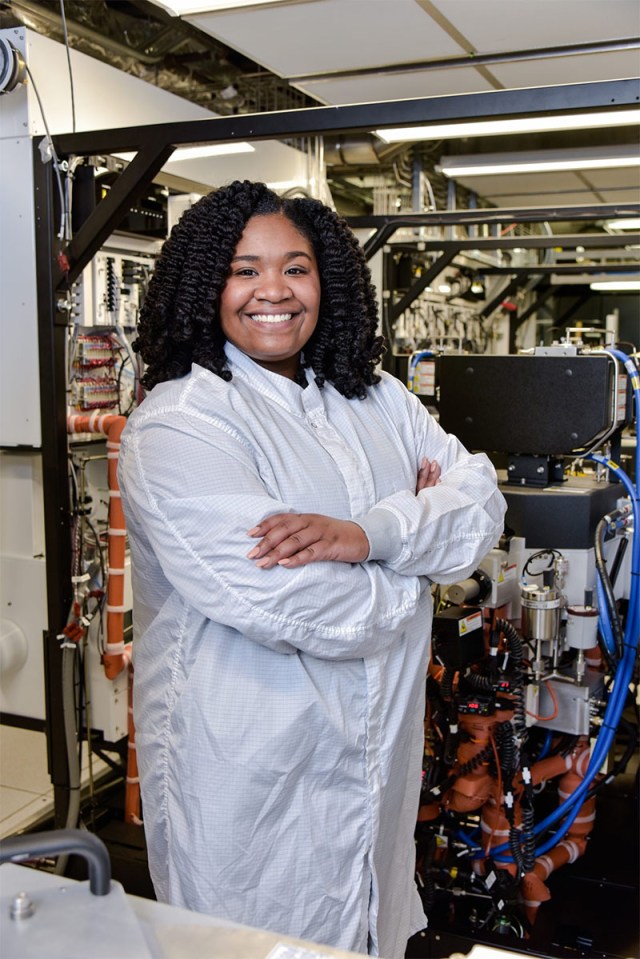 ​At age 27, Dr. Monique Farrell has already accomplished what some aspire to in a lifetime. And she’s not done yet.

Forged by friendly competition among her eight brothers and sisters and a strong work ethic learned from her Caribbean parents, Farrell brings a unique perspective and an uncommon enthusiasm to her role as a Principal Microelectronics Semiconductor Engineer.

This February, Farrell was selected as the country’s Most Promising Engineer in Industry at the Black Engineer of the Year Awards (BEYA) Gala in Washington, D.C. The award recognizes a budding career, which includes seven published technical papers, more than 20 technical conference presentations, five post-high school degrees and certificates and additional recognitions from Northrop Grumman, the state of Massachusetts and many others.

“It’s a family thing; I’m no stranger to hard work,” Farrell said. “I’m a first-generation Caribbean-American. My parents came over, worked really hard, and instilled that work ethic in all of us.”

One of eight siblings, Farrell’s family helped shape her into the successful professional she is today.

As a result, Farrell’s entire family brims with academic and professional accomplishments. Farrell’s father demonstrated an uncompromising work ethic and continued learning over a 30-year career. Her mother received her Juris Doctorate degree while she was 29 with four children and one on the way. Her brother earned his doctorate in physical therapy, starting his own company shortly after. Her younger sister is working on her third master’s degree and another brother is pursuing a Ph.D. in aerospace engineering. Still, another brother is working on a bachelor’s degree in electrical engineering; while Monique’s three youngest siblings are just beginning college and excelling in middle school.

“It’s a competition, but we support each other,” Farrell said. “Even last night, we were Skyping with my little sister, who is in college now, helping to figure out her math problems.”

But despite strong support from her family, Monique encountered cultural and academic challenges, which helped shape her into the person and professional she is today.

During her undergraduate studies program at the University of Massachusetts – Amherst, Farrell was confronted with a new environment that was very different than her Caribbean-influenced home life.

“Coming from a Black and Latino culture, and going to UMass – Amherst, which is a predominantly white institution, I had some transition struggles,” Farrell said. “I wasn’t sure how Caribbean I could be.”

On top of the cultural shift, Farrell’s transition from biology to chemical engineering was also academically difficult. For the first time, Farrell found herself needing a tutor and extra study sessions.

“It definitely taught me a little bit about humility, but it also made me realize that if I am the smartest person in the room that might not be a room I want to stay in for very long, because I’m not learning anything new,” Farrell said.

Never one to give up, and with the help of her peers and minority engineering societies, including the Society of Hispanic Professional Engineers and the National Society of Black Engineers, Farrell continued on her path to success. She secured several internships and research experiences during her undergraduate career while serving in leadership roles across campus, including chapter president of the International Society of Pharmaceutical Engineers.

In graduate school at Norfolk State University, Monique continued to excel, conducting pharmaceutical research published in Scientific Reports Nature and the Journal of Nanoscience and Nanotechnology. She completed her Ph.D. at the very young age of 24.

Monique Farrell’s projects at the Advanced Technology Laboratories have led to improvements in supplier quality and employee safety.

After graduation, Farrell’s path to Northrop Grumman wasn’t a direct one.

“Initially, I had pharmaceutical and other applications in mind,” Farrell said. “My motto was ‘increasing quality of life for humans.’ But once I started job searching, I realized that could be applied to a lot of different things, especially defense and security. To have quality of life is to have safety and peace.”

At Northrop Grumman, Farrell has made a big impact in only two-and-a-half short years. Within the first three months of her tenure, she led an effort to eliminate a supplier defect by instituting a new inspection process of incoming materials. She currently leads a project that improves the safety of employees working on e-beam lithography processes, replacing chlorobenzene-based chemicals with a safer alternative. In addition, Farrell has shared her knowledge by teaching nine technical classes covering statistical process control, data correlation and regression, as well as an introduction to e-beam lithography.

Now a fixture at Northrop Grumman’s Advanced Technology Laboratories, Farrell is excited for what the future might hold and looking forward to living up to her title of Most Promising Engineer in Industry.

“This award is an extreme honor,” she said. “Not only is it an honor, it is also a challenge to execute the potential BEYA and Northrop Grumman has seen in me. I am excited to finish some of the technical initiatives I currently spearhead and to start new ones that will continue to propel the Advanced Technology Laboratories and Northrop Grumman forward.”