As an engineering manager at Northrop Grumman, Jim’s ability to logically prepare and visualize a solution better equipped him and his team for this adventure.

Like many adventurers, Jim’s passion for exploring was sparked by reading. He turned to some of the greatest explorers who pioneered major scientific expeditions – David Livingstone, Charles Darwin, Ernest Shackleton and others. Each traveled unknown lands where they discovered extraordinary natural life, like two foot diameter flowers near the source of the Nile River.

This fascination of learning new, undiscovered environments and cultures drove Jim to want to have his own unique experiences.

Jim’s admirable climbing career has led him all over the world. He’s climbed the Seven Summits, the tallest mountain on each continent, plus an alternate one in Indonesia to cover the controversy over what qualifies as the tallest peak on the Indo-Australian tectonic plate: Aconcagua, Carstensz Pyramid, Denali, Elbrus, Everest, Kilimanjaro, Kosciuszko and Vinson Massif.

“I call it the accidental seven summits,” he explains. “I never set out to do all of them – it just accumulated through various points of interests, mostly around the cultural aspects of adventuring. I thought it would be fascinating to go to countries I’ve never been to, and climbing was just one highlight of that cultural experience.”

This past May, Jim successfully climbed the summit of Mt. Everest.

He has attempted this climb four times before, but faced many unexpected challenges. In 2014, it was the first time Mt. Everest was closed to climbers due to an avalanche killing 16 climbers. In 2015, the mountain was closed again due to a 7.8 earthquake killing 20 climbers and requiring a high altitude rescue after the decent route through the ice fall was destroyed. That year the team remained in Khumbu Valley of Nepal to help rebuild a small part of the high altitude village of Phortse. In 2017, he fell ill while climbing and experienced a hospital complication in Kathmandu, Nepal. And in 2018, his entire team experienced oxygen regulator failures at 28,500′, losing all oxygen and requiring a dramatic team self-rescue.

No matter the threat Mt. Everest posed, Jim knew what to do: stay calm and carry on.

Preparation is key to a successful climb. Jim spent months training, both mentally and physically, for Mt. Everest. He built up a tolerance to the challenges he would encounter in the harsh environment. Jim hiked 20 miles a day with a 50 lb. backpack and slept in a hypoxic tent, which helps with acclimatizing to high altitudes. He also did gear and technical training in order to become as efficient with it as possible.

As an engineering manager at Northrop Grumman, Jim’s ability to logically prepare and visualize a solution better equipped him for this adventure.
He drafted rough story board sketches that would help his team think through all of the moves and logistics required for the climb. They would go over specific procedures for providing rescues in certain situations. Knowing exactly how to do particular maneuvers before going out on the field helped unify his team and reduce risk.

Jim reached Camp Two at 25,000 feet. Perched in rocky terrain, climbers took extreme caution as one false step could have led to a tragic multi-thousand foot tumble. But even with months of preparation and planning, there’s never certainty of an outcome. Jim doubted his fifth attempt would be victorious due to high winds causing there to be only a one day window to climb.

After trekking for 40 days in high winds and unexpected rocky terrain, Jim reached the peak with a Northrop Grumman flag in hand. 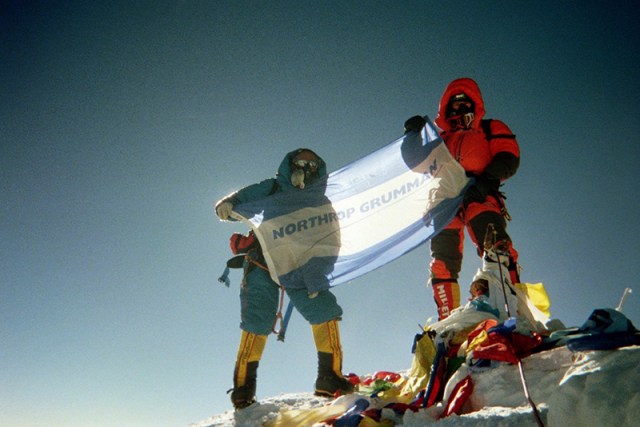 “I’ve been with the company for over 30 years,” Jim says. “I’m very appreciative of the support I’ve received from Northrop Grumman. From the understanding people to career opportunities, I’m able to pursue a very significant hobby that requires a lot of support and time.”

Jim’s ability to maintain both his passions for hiking and engineering means he’ll have many adventures in the future. Next on his list is to help friends climb Denali, which he’s climbed four times before.