After giving birth to her daughter in 2013, Tina’s perspective on her job changed and she sought a more even work-life balance. Read about Tina’s career journey, and what she found when she decided to return to Northrop Grumman. 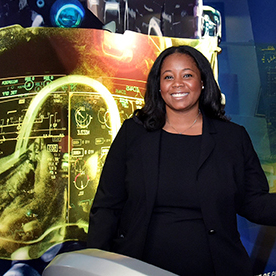 In 2007, after graduating from Morgan State University (MSU) in Baltimore, Maryland, with a bachelor’s degree in Industrial Engineering, she attended a career fair in search of her first job out of college. Unsure of exactly what she wanted to do and where, Tina met with several companies.

“I had never heard of Northrop Grumman before that day,” Tina said. “I walked up, I was very nervous, and I spoke with Cheryl “CJ” and we just had a candid conversation about work after college.”

“I was like ‘Oh! I had never thought about business management!'” Tina said. “I had an engineering degree, I was technical, and that interface with her made me say ‘I think I might try that.'”

After an on-site interview at MSU and another conversation with CJ, Tina joined Northrop Grumman’s Professional Development Program, now the Pathways program, with CJ as her manager.

Typically, Pathways program participants are early-career employees who rotate to several different areas over the course of their enrollment. In Tina’s case, she was in her first rotation for six months before she was offered and accepted a permanent position as an engineering planning analyst. With her technical background, Tina was able to offer an engineer’s perspective on integrated program scheduling.

In fall 2008, a job opened up as an operations program manager (OPM) in the Surveillance business unit of the Airborne C4ISR division. She applied for and earned the position, overseeing the manufacturing of a variety of surveillance programs for the next five years, including the Multi-Platform Radar Technology Insertion Program for the Global Hawk and Triton systems.

Despite enjoying her role and completing her master’s degree and project management certification coursework during her time as an OPM, Tina felt limited and stagnant in her job. After staying in her role for five years, she began to look for the next opportunity.

One day, she got a call from an old contact who worked at GE Aviation looking to fill an immediate need for program managers. Tina told her old boss he was in luck and left Northrop Grumman for a job with increased responsibility and leadership opportunities.

Despite the leadership opportunity, the new job didn’t fit Tina perfectly. After giving birth to her daughter in 2013, her perspective on her job changed and she sought a more even work-life balance. Seeing an opportunity to reduce her frequent international travel and commute time in order to spend more time with her daughter, Tina found an opportunity on Northrop Grumman’s website and re-applied.

“I knew I had to make a change for me and my family,” Tina said.

Tina decided to return to Northrop Grumman in 2014 and hasn’t looked back since. She returned to an operations program management role within the Surveillance business unit of the AC4ISR division, transitioned to an OPM and then a functional OPM in the Advanced Strike and Mission Enablers business unit.  She also served another stint in the program management organization, and is now the business-facing lead OPM. Tina looks forward to her next opportunity, while enjoying a greater appreciation for the environment and flexibility Northrop Grumman affords.

“After seeing another company and the resources they had available to them, it really heightened the strengths I saw in Northrop Grumman,” Tina said. “When I walk in here and I see the team that I have and the scope of work that I have, I can go home smiling.”

Strengthening Tina’s tie to Northrop Grumman, five of her family members served in the military, including three that are on active duty.

“The product that I’m developing could be something that is directly impacting my family,” Tina said. “When you start to look at the mission of your role, it grounds you and makes your work that much more important.”