We are leveraging successes with high-energy, solid-state lasers to advance electric technology through the Army's Robust Electric Laser Initiative (RELI), as well as under a contract for the Revolution in Fiber Lasers (RIFL) program from DARPA. By improving efficiency and beam quality. Both offer scalable and affordable approaches for military users. 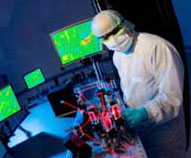 With deep magazines and scalable in power to address specific threats, these operational weapons will provide crucial defensive military advantages at the strategic, operational and tactical levels of warfare.

Successes in power level, run time and beam quality under the JHPSSL program led to the development of the Maritime Laser Demonstration for the U.S. Navy, where the company in 2011 became the first to successfully operate a laser weapon at sea.

JHPSSL technology also is the underlying technology for the company's FIRESTRIKE laser product line introduced in 2009 that builds on its heritage of record-breaking, high-energy, solid state lasers. Since that time, Northrop Grumman has invested internal funds to fabricate, integrate, and test a demonstration prototype of the FIRESTRIKE laser called Gamma.

Northrop Grumman is the birthplace of many exciting, leading-edge laser and beam control technologies that hold tremendous promise for our nation's defense. Laser scientists and engineers here were the first to meet the exceptionally demanding goals of the Joint High Power Solid-State Laser Program (JHPSSL) Phase 3 program to scale a solid-state laser to the 100 kW power level.

The technical staff is supported by an infrastructure unique in the aerospace and defense industry, including the Directed Energy Production Facility, a specialized facility established exclusively for system integration and production of high-energy laser systems for military uses. The facility is the first of its kind built by private industry in the United States.

Directed Energy Systems turn ideas into designs and designs into products that meet the rigorous demands of our customers. We have extensive laboratories for optical fabrication and test, as well as clean rooms, vacuum chambers and related equipment for space simulation, calibration and performance testing of lasers ranging in power from watts to megawatts. The precision metrology lab is unique in its ability to characterize the performance of high-energy laser optics.

The company's expertise in solid-state lasers and chemical lasers is unmatched. Multiple development efforts are ongoing for high-power, solid-state lasers in the post-JHPSSL era, the Strategic Illuminator Laser Program (SILL), and our in-house development of Vesta. 19 kW with a beam quality of 1.7 that was a world record for brightness. The Vesta solid-state laser has demonstrated indefinite run time at a power level of 15 kW, and a beam quality of 1.3, and we are currently scaling to the 100kW power level. In addition to our solid-state and chemical laser efforts, we have extensive on-going development efforts in Beam Control and high power Fiber Lasers.

Whether it's for homeland security, U.S military applications, or for aiding our allies, Northrop Grumman's lasers are well suited to advanced applications from land, sea, air and space.