Free-space optical (FSO) communication systems occupy a niche market as a solution to the last mile problem. Digging trenches to lay fiber is expensive especially in urban areas. A pair of high bandwidth FSO terminals can be deployed faster and cheaper than fiber of equivalent bandwidth. Compared to other wireless technology, FSO is more secure due to the difficulty of clandestine interception of a narrow laser beam of an AO system. 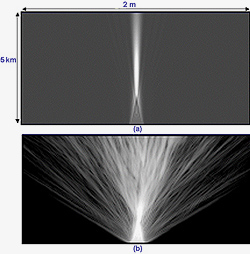 There is considerable interest in extending the range of laser communications. This can be done quite feasibly in space or the upper atmosphere. Near the ground, however, atmospheric aberrations are relatively strong and distributed along the entire path. The result is severe beam spreading and wander, which reduces the signal that is captured by the receiver terminal.

A severely perturbed beam will exhibit intensity scintillation, essentially a speckle pattern. If a very dark portion of the speckle pattern covers either the aperture or the active region of the detector, the total power captured by the sensor is reduced. This phenomenon is called a fade and exacerbates bit error rate reducing information bandwidth. During such events the power reaching the detector may be reduced by a factor of more than a thousand relative to the average power. It is very difficult to design a communications link that can maintain a low bit error rate (BER) during these deep fade events. Fading of the signal due to the effects of atmospheric turbulence is a well documented problem for optical communication links.

AOA Xinetics has investigated the benefits of traditional adaptive optics for laser communications. We have built custom wavefront sensors to gather data from field measurements of turbulence over horizontal line of sight paths. The results have shown feasibility of achieving a degree of correction using successive modal corrections from the atmospheric turbulence. 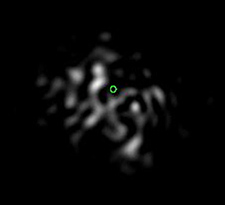 Speckle pattern at the receiver focal plane during a deep fade event. (Detector is located at green circle)

Our simulations show that there is a limit to benefits of traditional adaptive optics for the deep fade regime, where speckle and beam spreading effects prevent high fidelity measurement of the wavefront. In this scenario, non-traditional AO techniques for fade mitigation are employed, such as speckle optimization.

Speckle optimization refers to the combined effects of speckle shaping and speckle following. The former technique requires an active transmitter, while the latter requires and active receiver. Both require closed-loop feedback, and both use dithering and metric peak-up.

The characteristics of the speckle pattern at the detector plane are determined by the atmospheric aberrations and the optical system. If the typical size of an individual speckle is larger than the sensor then it is possible to dither the sensor (using motion control hardware) to determine the local gradient of the speckle. Then it is a matter of climbing the gradient and constantly positioning the sensor at the peak intensity of a speckle, termed Speckle Following.

Speckle evolution is more complex than simple translations; they grow and fade. Shaping can be employed to ensure that there is a large enough speckle near the sensor. This technique involves modulating the phase at the transmitter, similar to the action of a deformable mirror. Dithering the phase will cause the speckle pattern to evolve and a hill-climbing algorithm can be devised to maintain the power on the sensor.

We have simulated a speckle optimization scenario with typical parameters for a laser communication system over a long horizontal path length. The results of these simulations show that even with a modest number of phase modulators it is possible to very significantly reduce the occurrence of deep fades. Our analysis of system performance indicates that speckle following and shaping can maintain the received power stabilized within a 10 db band under conditions that produce fades deeper than 30 db for an uncompensated system. 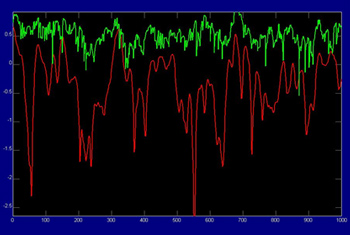 Log intensity vs. iteration number. Green is with speckle optimization, Red is uncompensated