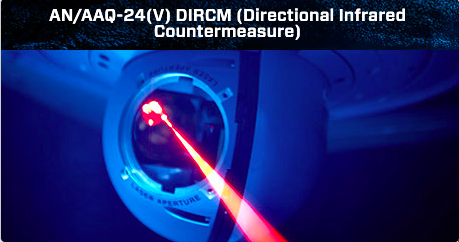 Capabilities in the Middle East

Key Capabilities in the Middle East

Northrop Grumman is proud to have been at the forefront of warfighter protection since 1961. That's when our engineers developed the first active onboard IRCM system. Today, our DIRCM laser-based systems protect more than 80 aircraft types, including large and small fixed-wing, rotary-wing and tilt-wing platforms.

Both systems feature mission-critical features, including open, multi-domain architecture that enables interoperability, integration and affordability. By using these systems, our revolutionary IAMD approach allows for more flexible defense designs and smaller forces to be deployed while increasing protection area.

IBCS is the sole U.S. government-approved solution for interoperable IAMD C2 for allies and coalition forces. The system provides an enhanced common operating picture for air and missile defense warfighters and commanders, and it delivers "any sensor, best effector" capabilities. IBCS is designed to replace older, outdated C2 systems and infrastructure of heritage programs and integrate current and future sensors and weapon systems for the most cutting-edge IAMD possible.

Northrop Grumman is the prime contractor for this revolutionary IAMD C4I system that allows for more flexible defense designs and smaller forces to be deployed while increasing protection area. IBCS' open system architecture is foundational to enabling joint interoperability, making it a cost-effective solution to defend against an increasingly complex threat.

Northrop Grumman's SHORAD capabilities in the Middle East and beyond protect U.S. and allied forces from a wide range of manned and unmanned air and missile threats. Our capabilities use sensors, weapons and command control to acquire, track, verify, engage and defeat incoming threats. They are built on an open systems architecture that enables integration of a variety of sensors and solutions to defeat current and future threats.

Northrop Grumman's Distributed Mission Operations Network (DMON) has been supporting training operations and integration since its launch in 1999. With 300+ simulator integrations in 85 sites around the world, Northrop Grumman delivers a fully functioning, collective training solution that is scalable, assured by the USAF, and cyber secure. DMON allows different aircraft simulator platforms located across the globe to seamlessly interoperate and train together in a realistic virtual environment via a secure network.

Northrop Grumman is able to provide the decisive advantage to LVC training by integrating the live environment with the synthetic (VC) via the LEXIOS system. A full-LVC spectrum suite of services, hardware and software that links live and virtual participants, LEXIOS enables robust real-world training in advanced training exercises.

The APG-83 is an active, electronically scanned array (AESA) fire control radar. Building on Northrop Grumman's 40-year legacy producing radars for the F-16, it integrates within the F-16's current structural, power and cooling constraints without Group A aircraft modification. The capabilities of this advanced AESA are derived from the company's family of highly successful 5th generation fighter AESA radars, the F-22's APG-77 and F-35's APG-81.

To counter more sophisticated threats, the world's newest fighter aircraft and legacy fleets are being equipped with AESA radars. The greater bandwidth, speed and agility of AESA radars enable fighter and legacy aircraft to detect, track and identify a greater numbers of targets, faster and at longer ranges in hostile electronic environments. The APG-83 AESA provides capability enhancements over legacy mechanically scanned APG-66 and APG-68 radars to ensure F-16s, F-18s and other 4th generation aircraft remain operationally viable and sustainable for decades to come. Production is underway for global F-16 upgrade and new aircraft production programs.

Northrop Grumman is a principal member of the Lockheed Martin-led industry team, which is developing and producing three variants. The F-35A is the conventional takeoff and landing (CTOL) variant, the F-35B is the short takeoff-vertical landing (STOVL) variant, and the F-35C is the carrier variant (CV).

The program's hallmarks — affordability, survivability, sustainability and lethality — are achieved through the use of the most modern military aircraft technologies, state-of-the-art production facilities and a high degree of commonality among the three variants.

Northrop Grumman plays a critical role in the development, demonstration and production of this multirole fighter, including:

Fire Scout is a combat proven, autonomous helicopter system that provides real-time Intelligence, Surveillance, Reconnaissance, and Target-acquisition (ISR&T), laser designation and battle management to tactical users without relying on manned aircraft or space-based assets. Fire Scout has the ability to operate from any air-capable ship or land base in support persistent ISR&T requirements.

The MQ-8C Fire Scout is the Navy's next generation autonomous helicopter. The MQ-8C Fire Scout's airframe is based on the commercial Bell 407, a mature helicopter with more than 1,600 airframes produced and over 4.4 million flight hours. Combined with the maturity of Northrop Grumman's autonomous systems architecture, Fire Scout meets customer requirements for ship-based and land-based autonomous systems. It also has the ability to autonomously take-off and land on any aviation-capable ship and from prepared and unprepared landing zones. This enhancement significantly increases range and endurance (more than double) and payload capacity (more than triple). The MQ-8C has completed developmental testing and is ready to deploy.

Northrop Grumman is a proven leader in Live, Virtual and Constructive (LVC) training solutions. Since 1999, Northrop Grumman has been providing worldwide LVC training for the U.S. Air Force (USAF). Affordable, resilient and secure, our systems use open architecture and modular scenarios to adapt to any challenge the future may hold.

Whereas other companies claim LVC capability, Northrop Grumman is the only one with demonstrated successes in connecting the live environment to actual warfighter simulators. Also, as more and more countries add various aircraft to their fleets, they will need the interoperable, on-demand, global LVC training solution offered by Northrop Grumman.