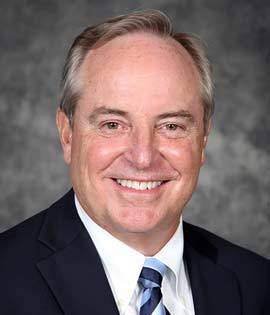 Gen. Mark A. Welsh III (U.S. Air Force retired) was elected to the Northrop Grumman Board of Directors in 2016.

Welsh is the dean of the Bush School of Government and Public Service at Texas A&M University.

Prior to his current position at Texas A&M University, Welsh served as chief of staff of the U.S. Air Force, the senior uniformed Air Force officer responsible for the organization, training and equipping of active-duty, Guard, Reserve and civilian forces serving in the U.S. and overseas. During his long career, Welsh also served as a member of the Joint Chiefs of Staff, commander of the U.S. Air Forces in Europe, commander of NATO’s Air Command, associate director for military affairs at the Central Intelligence Agency and commandant of the United States Air Force Academy.

Northrop Grumman is a technology company, focused on global security and human discovery. Our pioneering solutions equip our customers with capabilities they need to connect, advance and protect the U.S. and its allies. Driven by a shared purpose to solve our customers’ toughest problems, our 90,000 employees define possible every day.