Northrop Grumman has been advancing propulsion technology since 1958. Our earliest work involved cold gas, heated gas, and liquid bipropellant and monopropellant rockets and boosters; we continue to further these technologies today.

Northrop Grumman has been advancing propulsion technology since 1958. Our earliest work involved cold gas, heated gas, and liquid bipropellant and monopropellant rockets and boosters; we continue to further these technologies today. For example, Northrop Grumman was selected in May 2001 by NASA to be one of the developers of new propulsion technology for potential use on next-generation launch and space transportation vehicles.

We have been developing electric propulsion since the 1970s and have made recent world-class advances in gel propellant propulsion.

Our fundamental research and development has been applied to a range of flight hardware for a wide range of space missions. Recent flight successes of propulsion systems have included NASA's Chandra X-ray Observatory, the Army's gel-powered FMTI missile, and a SCAT-powered spacecraft. 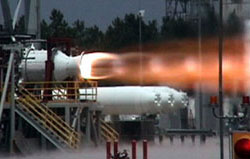 Based on Northrop Grumman's pintle engine technology, Northrop Grumman's 650,000-pound thrust TR-106 engine is one of the largest liquid rockets ever built. It has been successfully test fired at 100 percent of its rated thrust as well as at 65 percent throttle condition in tests at NASA's John C. Stennis Space Center. 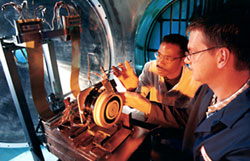 Northrop Grumman's patented face-shutoff engine enables gel propulsion system operation. Gel propellants exhibit the consistency of thick mayonnaise, but will liquefy and combust when pressurized. These semi-solid propellants do not leak, detonate or explode under adverse conditions. Gel propellants are safe and environmentally sound and can be disposed of at 1/10th the cost of solid propellants. 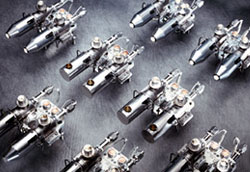 Northrop Grumman has developed, qualified and flown spacecraft monopropellant thrusters for on-orbit delta velocity and attitude control for a variety of spacecraft for more than 25 years. Our family of catalytic monopropellant hydrazine thrusters range in size from 0.1 lbf thrust to 15 lbf thrust. These thrusters all share the unique Northrop Grumman head space design, utilize Shell 405 catalyst, and incorporate bed loadings consistent with long life. For robustness and maximum user flexibility, all thrusters are qualified with monopropellant grade hydrazine. We recently requalified our 0.2 lbf thruster for the long-life Chandra X-ray Observatory mission.