Northrop Grumman's award-winning Secure Communications System (SCS) is a next-generation secure communications solution for military, government and large corporations. The SCS has been designed to allow mobile teams to exchange data most efficiently, securely, and cost-effectively. 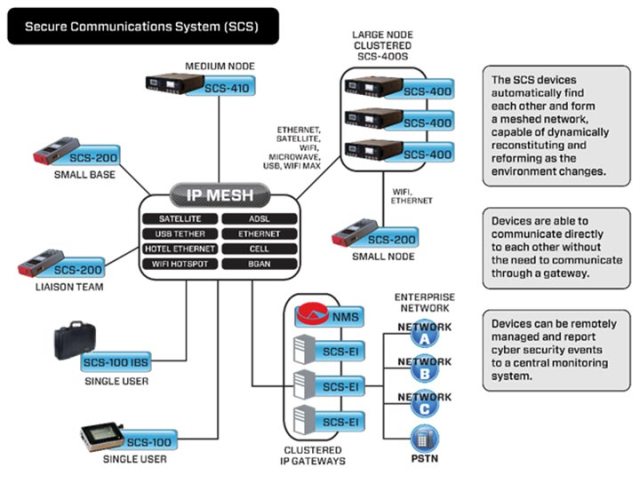 The SCS products have been specifically designed for operation by non-IT specialists. The SCS-100, SCS-200 and SCS-400 devices feature intuitive graphical user interfaces that allow one-touch set up and simple configuration. To further assist the user, the system utilises network traffic, SNMP, and event log data to detect and repair faults and provide clear advice on system or device status. The System also features remote administration capabilities through the SCS-NMS if the user requires any additional assistance.

Designed for the travelling executive requiring classified access; the SCS-100's small and lightweight form factor is designed to allow a single user access to highly secure, classified and unclassified networks simultaneously from anywhere in the world.

Based on the SCS-100, the Integrated Briefcase System (IBS) is a fully mobile, secure all-in-one capability that eliminates the need to travel with technical specialists.

The SCS-200 is a break-through in highly secure mobile environments, allowing a small team of mobile users (one to four individuals) to connect to secure networks using any IP network for transport.

The SCS-400 is a field-deployable headquarters, extending the capabilities of the SCS-100 and SCS-200, and supports small to mediums teams of connected users with a self-healing, self-forming IP mesh network.

The SCS-Network Management System (SCS-NMS) provides central administration and management of all components of the Secure Communications System.