During the early days of U.S. military involvement in World War II, the country had been caught off guard, suffering a string of devastating defeats, and left with few victories on the horizon. Most far-flung U.S. military outposts in the Pacific had been lost in mere weeks, with forces in the Philippines surrendering in April 1942, just over five months after the Imperial Japanese attack on Pearl Harbor. 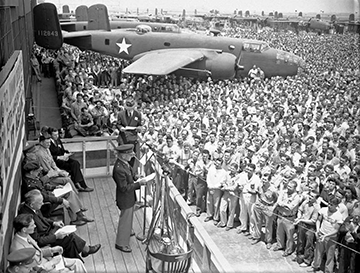 This string of events left much of Asia, and even Australia, open to possible invasion. With Germany virtually in control of Europe and much of North Africa, the Axis powers appeared to be holding every advantage. At the time, Americans longed for good news that would bring hope for their future.

America’s enemies at that time viewed the United States as ill-prepared to defend itself. Americans were viewed as isolationists, too weak to stand up for themselves and their allies.

That’s when a plan was devised that seemed so bold and crazy it might be impossible. Its participants are now known as the Doolittle Raiders.

A group of 80 U.S. Army Air Corps B-25 Mitchell bomber crew members, led by Lt. Col. Jimmy Doolittle, would launch an extremely long-range attack off the deck of an aircraft carrier against military and industrial facilities in the Japanese capital of Tokyo. The mission was so far from any Allied airfields that the 16 B-25 would then have to fly directly to China to achieve any hope of finding a safe landing.

The Doolittle Raiders knew they might not make it back. If their mission were successful, however, it would have far-reaching effects on American morale and prove that mainland Japan was not impervious to attack. 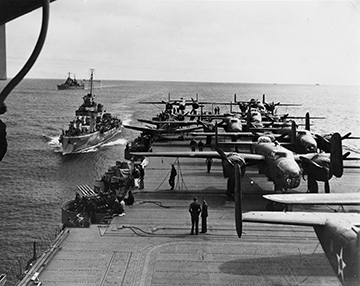 Crews and their B-25 Mitchell bombers are lined up on the deck of the USS Hornet in preparation for their raid on Imperial Japanese military and industrial targets in April 1942. (U.S. Air Force photo)

From the start, a mission like this required an understanding that it carried significant risks and a high potential for failure. A group of aircraft engineers in Minneapolis had to devise innovative ways for the B-25s to carry more than 1,000 gallons of fuel while reducing their total weight to allow them to fly extreme distances. Additionally, the medium-size bombers were never designed to take off from an aircraft carrier, which left very little margin for error.

Modifications of the B-25s started in February 1942 in Minneapolis, with training taking place the next month at a small airfield relatively hidden from the outside world at Eglin Field near Fort Walton Beach, Florida. After a little more than three weeks, Doolittle concluded that the aircrews were ready.

On April 1, 1942, the aircraft were loaded onto the aircraft carrier USS Hornet (CV-8), and the ship set sail from San Francisco. There was a good chance they would be spotted by Japanese patrol boats as the ship approached the heavily guarded Japanese islands. The hope was that the vast Pacific Ocean would provide the cover they needed to get the Hornet, escorted by the USS Enterprise (CV-6) and a small group of naval ships, close enough to the main island of Honshu to launch the attack without detection.

On April 18, roughly 200 miles out from the planned takeoff point for the B-25s, a small Japanese patrol boat found the task force but was destroyed by one of the escort ships. However, there were concerns that a radio message might have been sent to other ships, and the decision was made to launch the B-25s early. 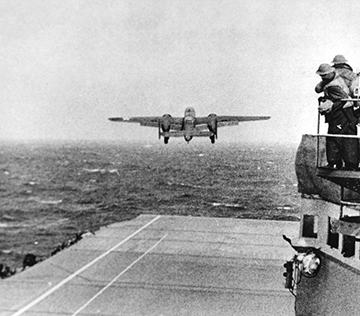 A B-25 Mitchell bomber takes off from the deck of the USS Hornet. The air crews on all 16 of the B-25 successfully accomplished the takeoff, with 15 of the aircraft successfully reaching their targets. (U.S. Air Force photo)

Lt. Col. Doolittle’s plane was the first to take off from the Hornet, with others quickly trailing in single file from the deck. The air crews joined in separate formations as they made their way to their designated targets. Everyone knew that taking off 200 miles short of their planned takeoff point reduced their chances of safely making it to airfields in China. The success of their mission, however, was now more important than their lives.

As the Doolittle Raiders approached their targets, they began to encounter heavy ground artillery fire, with few threats from the air. Their gamble of attacking the Japanese homeland caught the imperial military by surprise, with all but one American aircraft able to attack its targets.

The raid was not meant to deal a devastating blow, but it did provide a huge morale boost to the American public. The success of the mission helped pave the way for future victories.

Throughout the years, the Doolittle Raiders have come to symbolize courage and a “can do” attitude when presented with a seemingly impossible task. The people who helped prepare the B-25s, train the air crews and fly the mission created a legacy of delivering success, even in the face of impossible odds.

It’s only fitting that this legacy be imparted to the next generation of air crews and those who support them, as they fly the B-21 Raider to carry out future missions to protect our nation.

Read more about the Doolittle Raiders »

Epilepsy Safe Mode
Dampens color and removes blinks
This mode enables people with epilepsy to use the website safely by eliminating the risk of seizures that result from flashing or blinking animations and risky color combinations.
Visually Impaired Mode
Improves website's visuals
This mode adjusts the website for the convenience of users with visual impairments such as Degrading Eyesight, Tunnel Vision, Cataract, Glaucoma, and others.
Cognitive Disability Mode
Helps to focus on specific content
This mode provides different assistive options to help users with cognitive impairments such as Dyslexia, Autism, CVA, and others, to focus on the essential elements of the website more easily.
ADHD Friendly Mode
Reduces distractions and improve focus
This mode helps users with ADHD and Neurodevelopmental disorders to read, browse, and focus on the main website elements more easily while significantly reducing distractions.
Blindness Mode
Allows using the site with your screen-reader
This mode configures the website to be compatible with screen-readers such as JAWS, NVDA, VoiceOver, and TalkBack. A screen-reader is software for blind users that is installed on a computer and smartphone, and websites must be compatible with it.

We firmly believe that the internet should be available and accessible to anyone, and are committed to providing a website that is accessible to the widest possible audience, regardless of circumstance and ability.

To fulfill this, we aim to adhere as strictly as possible to the World Wide Web Consortium's (W3C) Web Content Accessibility Guidelines 2.1 (WCAG 2.1) at the AA level. These guidelines explain how to make web content accessible to people with a wide array of disabilities. Complying with those guidelines helps us ensure that the website is accessible to all people: blind people, people with motor impairments, visual impairment, cognitive disabilities, and more.

This website utilizes various technologies that are meant to make it as accessible as possible at all times. We utilize an accessibility interface that allows persons with specific disabilities to adjust the website's UI (user interface) and design it to their personal needs.

Additionally, the website utilizes an AI-based application that runs in the background and optimizes its accessibility level constantly. This application remediates the website's HTML, adapts Its functionality and behavior for screen-readers used by the blind users, and for keyboard functions used by individuals with motor impairments.

If you've found a malfunction or have ideas for improvement, we'll be happy to hear from you. You can reach out to the website's operators by using the following email

Our website implements the ARIA attributes (Accessible Rich Internet Applications) technique, alongside various different behavioral changes, to ensure blind users visiting with screen-readers are able to read, comprehend, and enjoy the website's functions. As soon as a user with a screen-reader enters your site, they immediately receive a prompt to enter the Screen-Reader Profile so they can browse and operate your site effectively. Here's how our website covers some of the most important screen-reader requirements, alongside console screenshots of code examples:

We aim to support the widest array of browsers and assistive technologies as possible, so our users can choose the best fitting tools for them, with as few limitations as possible. Therefore, we have worked very hard to be able to support all major systems that comprise over 95% of the user market share including Google Chrome, Mozilla Firefox, Apple Safari, Opera and Microsoft Edge, JAWS and NVDA (screen readers), both for Windows and for MAC users.

Despite our very best efforts to allow anybody to adjust the website to their needs, there may still be pages or sections that are not fully accessible, are in the process of becoming accessible, or are lacking an adequate technological solution to make them accessible. Still, we are continually improving our accessibility, adding, updating and improving its options and features, and developing and adopting new technologies. All this is meant to reach the optimal level of accessibility, following technological advancements. For any assistance, please reach out to