For retired U.S. Army Brig. Gen. Donald C. Bolduc (a hero in his own right as former commander for Special Operations Command Africa), a hero came in canine form. Victor, a trained German shepherd medical service dog, was recently paired with Bolduc thanks to Northrop Grumman’s sponsorship of dogs for veterans programs.

“Northrop Grumman has changed my life,” Bolduc said of the company’s sponsorship during his keynote speech at the Land & Avionics C4ISR division’s Prompt Start Summit in May. “You’ve given me the one thing that I had a gap in my life, and that’s Victor.”

The company’s support for dogs for veterans programs, including sponsorship of Victor and a second German shepherd to be named CIRCM, is just one way Northrop Grumman’s support of the warfighter extends well beyond technology.

Northrop Grumman began sponsoring Victor through the Florida-based Guardian Angels in 2017. The dog — whose name is a nod to the UH-60V Black Hawk helicopter (“V” for “Victor”) — is trained to assist people with disabilities. “The work that we do directly supports our warfighters and their missions when they are in harm’s way,” says Mary Petryszyn of Northrop Grumman. “I am proud that as an organization, we are also able to indirectly support our warfighters when they are back home through the great work of Guardian Angels.”

German shepherds are a breed known for service. These dogs aid military and law enforcement with crucial protective services, such as detecting enemy forces and bombs. The breed also excels in medical and trained companion service.

“Sponsorship of a corporation like Northrop Grumman means a lot to our organization,” Guardian Angels’ Director of Donor Relations Mary Jo Brandt says. “Not only is Northrop Grumman helping save the lives of veterans, they are also helping raise awareness about our organization and the value of service dogs. The more corporations that can be part of this mission, the more veterans we can help.”

Guardian Angels, a nonprofit organization, trains and raises the service dogs for 18 to 24 months, then gifts them to people with disabilities to provide companionship and improve their quality of life. Dogs can be trained to help those with post-traumatic stress (PTS), traumatic brain injury (TBI), mobility assistance, diabetes and seizures. More than 90 percent of the dogs trained by Guardian Angels are given to veterans.

The organization receives around 14,600 applications annually and is able to pair roughly 50 dogs each year. The application process is rigorous, including statements of need from physicians, photos of living situations, details on the applicant’s condition and a list of requirements from a service dog. The process can take up to three years to ensure the dog has been tailored to the recipient’s needs and the recipient is prepared to take their dog home. Veterans who have participated in the Guardian Angels program have seen significant benefits, such as improvements in familial relationships, decrease in medication, and reintegration into their communities. Before the dogs are released to their owners, the recipient spends 10 days bonding with their service dog.

“Each dog is custom-trained according to a person’s individual needs determined by their disability,” Brandt explains. “We see each recipient as a unique individual with unique medical needs.” 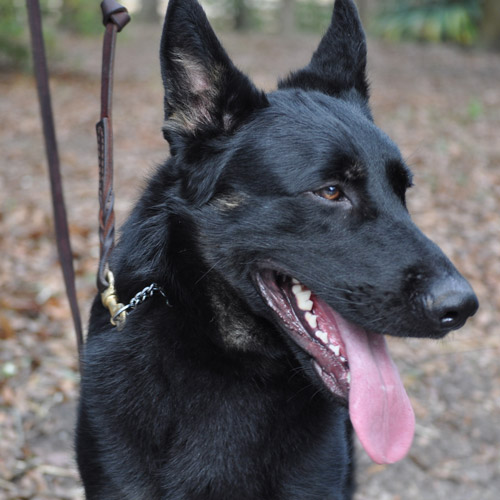 Based on their first three months together, Bolduc and Victor appear to be a superb match.

“Victor and I hit it off right from the first minute,” says Bolduc, whose 32-year military career honors include the Defense Service Medal, the Defense Superior Service Medal, the Legion of Merit, five Bronze Star Medals — including one Bronze Star Medal with Valor Device — an Army Commendation Medal with Valor Device and a Master Parachutist Badge.

Bolduc says his life has improved dramatically since pairing with Victor earlier this year. “Before Victor, I hadn’t driven a car in nearly five years,” he said. “Thanks to Victor, I have slowly made the transition back to feeling comfortable with driving.”

Bolduc also experiences intense dreams and sleep apnea, both of which Victor has been trained for. “He watches me while I sleep, and if he senses that I am not breathing or I am having a bad dream he will gently wake me up.”

Since retiring, Bolduc has become a vocal advocate for treatment and recognition of PTS and TBI, because of the mental health challenges he has faced. “I want to thank you very, very much,” he told Northrop Grumman employees at the Prompt Start event. “You’ve made one veteran’s life significantly better, and that’s allowed me to make other people’s lives better and become an advocate for veterans.”

Supporting the warfighter while on active duty through programs like C4ISR, as well as helping veterans as they transition to civilian careers and civilian life, is an integral part of the Northrop Grumman culture.