Northrop Grumman provides reliable and flight-proven solid rocket motors for both Northrop Grumman vehicles and for other providers in defense and commercial markets. For defense programs, the company produces propulsion systems for the company-built Ground-based Midcourse Defense interceptor, as well as for the Trident II D-5 and Minuteman III strategic missiles.

Northrop Grumman is providing the five segment boosters for NASA's Space Launch System (SLS) and the main launch-abort motor and the attitude control motor for the Orion Crew Vehicle’s Launch Abort System (LAS). In addition Northrop Grumman propulsion systems are employed in the company's Pegasus®, Minotaur, Antares™ and OmegA™ rockets as well as in Delta IV and commercial launch vehicles.

What Are Northrop Grumman Solid Rocket Motors Used For?

Northrop Grumman is the leader in providing solid rocket motors for civil, national security and commercial rockets. From rockets that launch from below the sea, to ground and air launched rockets, our customers rely on our solid-rocket motors to conduct their most important missions.

Northrop Grumman is a key provider of solid rocket motors for NASA’s space exploration system.  From the Five Segment solid rocket boosters for SLS, to the motors that help power Orion’s Launch Abort System,  we help SLS escape earth’s gravity and help ensure the safety of the Orion crew.

The low cost, highly reliable CASTOR motor family was originally developed in the 1950s to support the NASA Scout and Little Joe vehicles. The CASTOR family has a combined total of over 1,900 flights and a demonstrated reliability of 99.95%.

Northrop Grumman has provided strategic-grade motors to the U.S. military for six decades with a history of sustained success. The company has produced solid propulsion systems for the Ground-based Midcourse Defense interceptor, as well as for the Trident II D-5 and Minuteman III strategic missiles. Northrop Grumman has 100 percent propulsion success on strategic production motors. 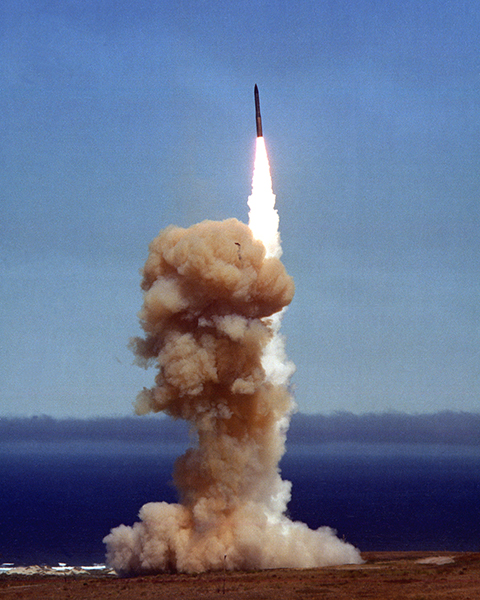 Minuteman III is a silo-based intercontinental ballistic missile with three solid-propellant stages and a fourth stage liquid-propellant rocket engine. It has been the prime land-based nuclear deterrent for the United States for more than 40 years, and plans are in place to ensure the Minuteman III continues this role past the year 2030. Northrop Grumman manufactures solid-propulsion boost motor systems for all three stages of the Trident II missile, also known as the Trident D5, under a contract from prime contractor Lockheed Martin Space Systems Co. Northrop Grumman has a long history of producing solid-propulsion systems for submarine-launched missiles, beginning with the Polaris missile in the 1950s.

The Trident II is a three-stage, solid-propellant, inertial-guided missile system that is the primary strategic weapons program in the U.S. Navy's Fleet Ballistic Missile system.

With a nominal range of 4,000 nautical miles, the D5 missile is launched under water from the Ohio class of nuclear-powered Trident submarines, each of which has 24 launch tubes. The Trident II was deployed in 1990 and is designed to be the primary U.S. strategic deterrent well into the 21st century.

Northrop Grumman Specialty Products leverage rocket technology to provide the Department of Defense with vital tools our warfighters need. These products include illuminating flares, aircraft countermeasures, and small warheads. These tools help our troops have the ability to see at night, avoid threats, and reduce collateral damage. Illuminating flares manufactured by Northrop Grumman are trusted around the world because of their excellent performance and reliability. Their advanced design makes them the product of choice for civil and military applications.

Northrop Grumman's advanced technology infrared countermeasures offer unparalleled aircraft protection. They can be readily adapted to any form factor or other customer requirement.

AeroVironment's Switchblade provides the warfighter with a lightweight, man-portable, rapidly deployable, loitering munition for use against beyond-line-of-sight (BLOS) targets.

This optically-guided, miniature tactical missile is a remotely-operated lethal platform that provides the user with real-time targeting information, to include video and GPS coordinates for information gathering and feature/object recognition. Additionally, these outputs allow the operator to exercise the system’s wave-off capability as the situation requires.

The air vehicle's small size, speed, and quiet motor make it difficult to detect, recognize, and track even at very close range. Switchblade is fully scalable and can be launched from a variety of air and ground platforms. Northrop Grumman Test and Research Services specializes in custom testing of inert and energetic materials and components ranging from ammunition and hand grenades to the largest solid rocket motors in the world. The company's cost structure can support small, commercial tests, large complex government contracts, and everything in-between.

Northrop Grumman operates explosives manufacturing facilities with chemical processes and an industrial setting closely aligned to those at the Department of Energy (DOE) facilities. They have demonstrated a world-class safety and quality operating culture in extremely high-hazard environments through effective application of proven management processes and an engaged workforce. They have established a key role in DOE operations as an integral part of the Consolidated Nuclear Security (CNS) organization currently managing the Y-12 and Pantex facilities. They have a demonstrated track record in operations turnarounds that have occurred as a part of corporate mergers and acquisitions, as well as in key government projects such as the Y-12/Pantex contract; operation of major Department of Defense (DoD) facilities at Radford, VA; and the modernization of the Australian Mulwala Munitions Facility.